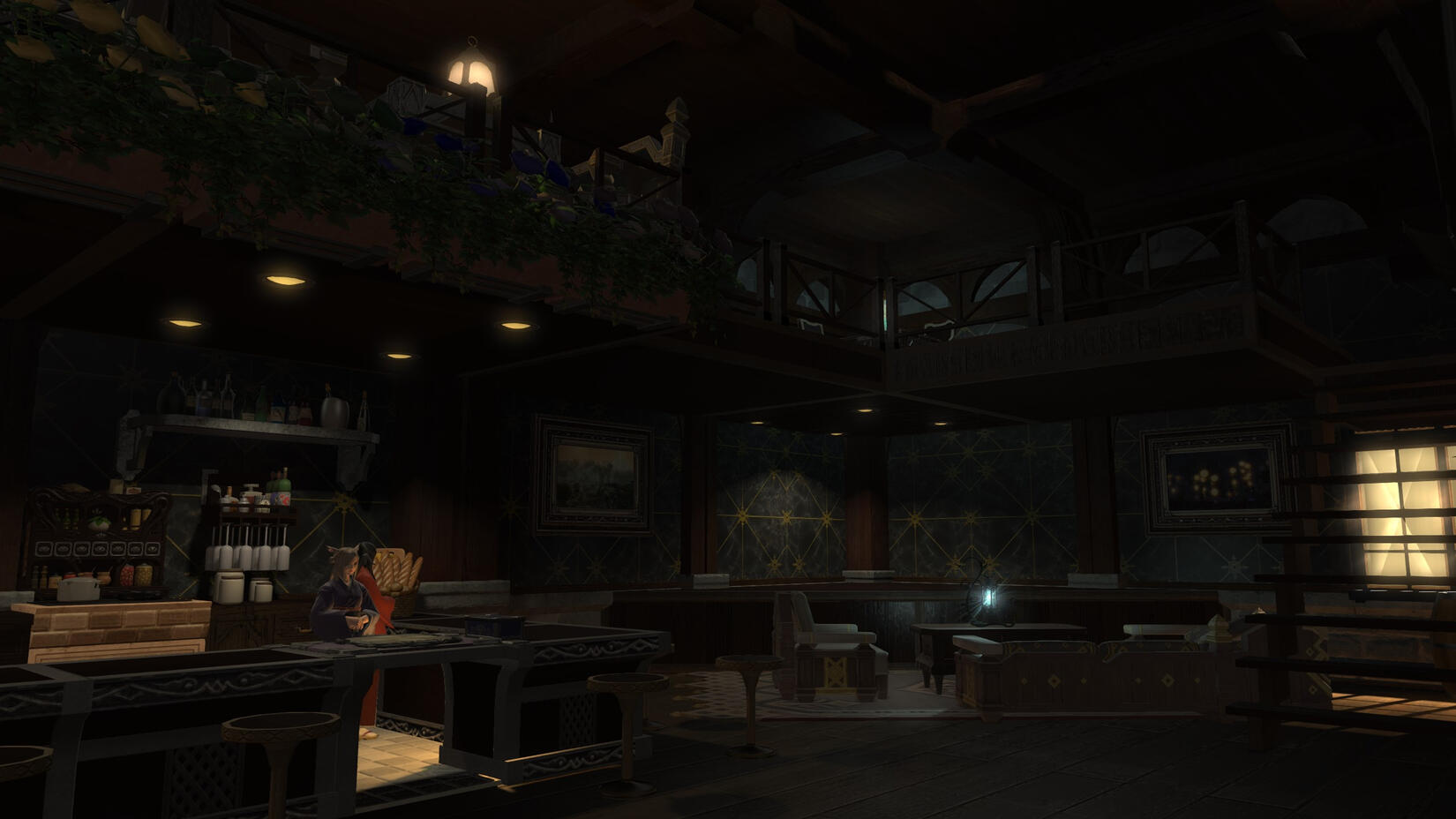 A quaint, down to earth pub and theatre. Located on Balmung at Goblet 13, Plot 54.

Phil Collins
A new take on the classic tom collins and named after our chief mixologist. We start with an onze and a half of ishgardian old tom gin, add a half onze of lemon juice, a half onze of pomegranate juice, an onze of gomme syrup, topped off with effervescent mineral water, and garnished with a lemon wedge and a cherry.

Chocobo Juice
A mixologists nightmare. Five onzes of the bartenders choice, all thrown into the same glass and topped with choice of soda.

If your favourite classic coctail is not listed above, don't be afraid to ask the wait staff if they can mix it up for you. Chances are if it's a well known drink, our bartenders know how to make it.

Fried dodo wings🌶️
A ponze of oven baked dodo wings, cooked in a sauce of your choice, and served with celery, carrot sticks, and blue cheese dressing.

Limsan calamari
a basket of fresh squid, battered and fried to perfection, and served with doman tempura sauce.

popoto wedges with jalapeno aoili🥬🌶️
fresh cut popotos, gently battered and fried until crispy. served alongside a small bowl of jalapeno aioli for a little kick while you dip.

beer battered shrimp
a basket of fresh shrimp, dipped in our home made gridanian stout batter, and fried until golden brown. Served with cocktail sauce.

Steak Frites
An ishgardian pub classic. Our steak frites is a twelve onze steak, cooked to your taste and served with a side order of our famous popoto wedges as well as a choice of peppercorn gravy or jalapeno aioli.

Surf and Turf
The limsan classic. An eight onze steak, cooked to your taste, paired with a large fresh lobster tail.

Individual price may vary as Lobster valued at market price.

Fresh lobster
The quintessential lobster meal. A full lobster boiled to perfection, served with a crusty bun and a side of coleslaw.

price may vary as lobster valued at market price.

Lobster roll
Another Limsan classic. A small baguette sliced in half and filled with our famous lemon and pepper lobster filling. Served with a choice of kettle chips or popoto wedges.

price may vary as lobster valued at market price.

Fish and Chips
A fillet of haddock, dipped in our home made gridanian stout batter, and served with tartar sauce, coleslaw, and a choice of kettle chips or popoto wedges.

Big old bar burger
a triple a la noscean ground beef patty, topped with a slice of age goblin cheese, and the toppigns of your choice, all sandwiched between a large sesame seed bun. Served with a choice of kettle chips or popoto wedges.

Portabello Burger🥬
A large juicy baked portabello, marinated in olive oil and balsamic vinegar, topped with a slice of faux jack cheese and the toppings of your choice, all sandwiched between a large sesame seed bun. Served with a choice of kettle chips or popoto wedges.

Spaghetti and meatballs
Spaghetti served in our old world sugo sauce with chunks of tomato and triple a beef meatballs. Served with a slice of cheesy garlic bread.

Feutccine Alfredo🥬
A bowl of fettuccine covered in our garlic Parmesan Alfredo sauce and served with a slice of cheesy garlic bread.

Tastes of the East

* all entrées come with choice of soup of the day or side salad unless otherwise noted.

Can't decide on what you'd like to eat?
We have an all-you-can-eat buffet table featuring a sampler of all of our favourite tastes on demand without any wait. Simply ask your server for a plate and they'll get you started.

Black Forest Gâteau
Chocolate sponge cake with white frosting and a rich filling made from cherry liquor. Topped with cherries and chocolate crumble.

Tiramasu
Coffee flavoured confection made by dipping ladyfingers in coffee and layering them between whipped mascarpone flavoured with cocoa.

Ul'dah Cheesecake
A sweet, cream cheese based layer over a graham cracker crust. Served with fresh rolanberries, drizzled on top.

Ice cream
A couple scoops of our home made ice cream, served in either a bowl or a cone. 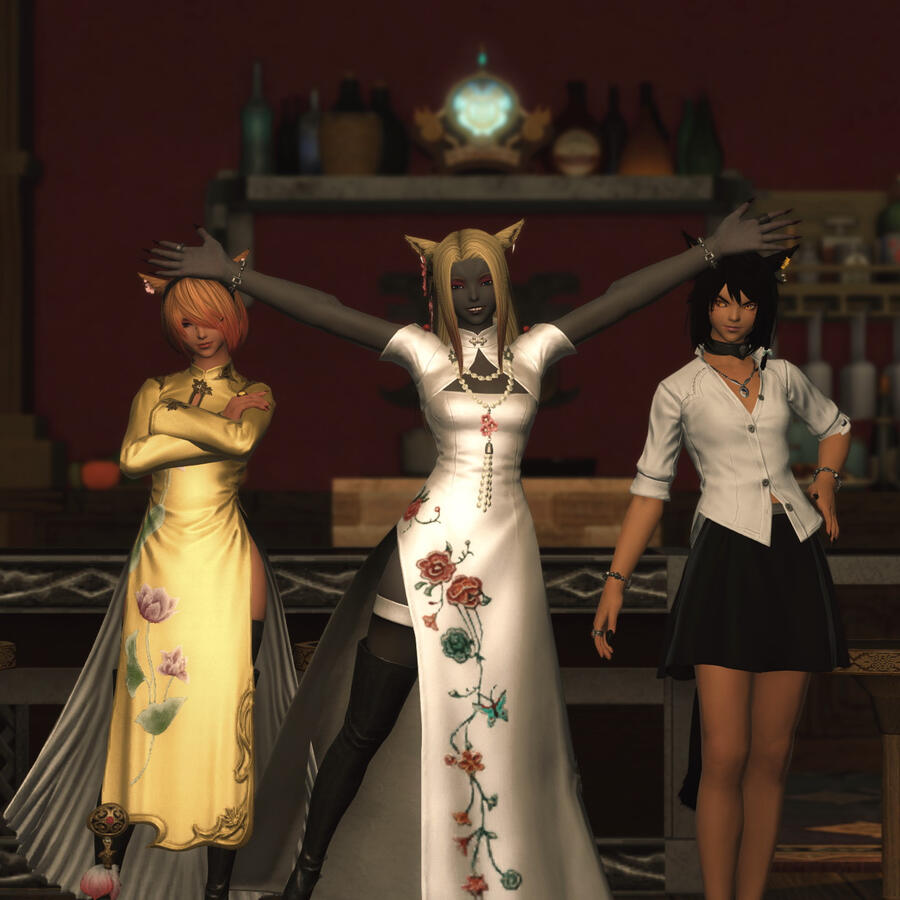 The Fiery Nut Theatre is located at Goblet Ward 13, Plot 54. Feel free to swing by any time and check the place out.

The owner of The Fiery Nut is the world renowned, best-selling author and woman of impeccable taste: Qahli Nuzoka. (nom de plume: Rebecca Steele) When she's not busy writing romantic thrillers and timeless classics, she can often be found behind the bar and acting as hostess.

While you are visiting the theatre, do not be afraid to ask her to sign your copy.

The Fiery Nut is happy to host private events for the sum of one hundred thousand gil for two hours. If you wish to host shorter or longer events, feel free to reach out in game or via email.